THE INSTITUTION OF CHARTERED ACCOUNTANTS OF INDIA

The Institution or Chartered Accountants of India (ICAI) has come across a Press Release issued by Central Bureau of Investigation (CBI), Guwahati wherein it has been mentioned that two of the accused involved in a criminal ease i.e Ramesh Goenka and Amit Goenka are chartered Accountant.

On going though the aforesaid Press Release, ICAI, being the regulator of the profession of Chattered Accountant verified its records and found that both the accused are not Chartered Accountants as their name do not appear in the Register of members maintained by the ICAI.

In view of the above, it is a matter of concern for ICAI that in the aforesaid matter CBI did not verify the credentials of the persons in question with ICAI before issuing a statement to the media and public at large.

The Institute shall be taking up the matter with the concerned authorities of the Central Bureau of Investigation, Guwahati and has pointed out that such statement should not be considered to be issued to media before Verifying the fact with ICAI. It would also be requested that in future, if any such case comes for their investigation wherein there is an alleged involvement of an individual claiming to be a Chartered Accountant, the matter may be referred to ICAI for cross verifying the credentials from its records.

The ICAI take a strong exception to the contents of the Press Release which is incorrect and misleading in so far as the reference to a ‘Chartered Accountant’ was made. In such sensitive case the concerned Department ought to have verified the facts with the Institute before issuing any statement wherein the involvement of a Chartered Accountant is suspected. 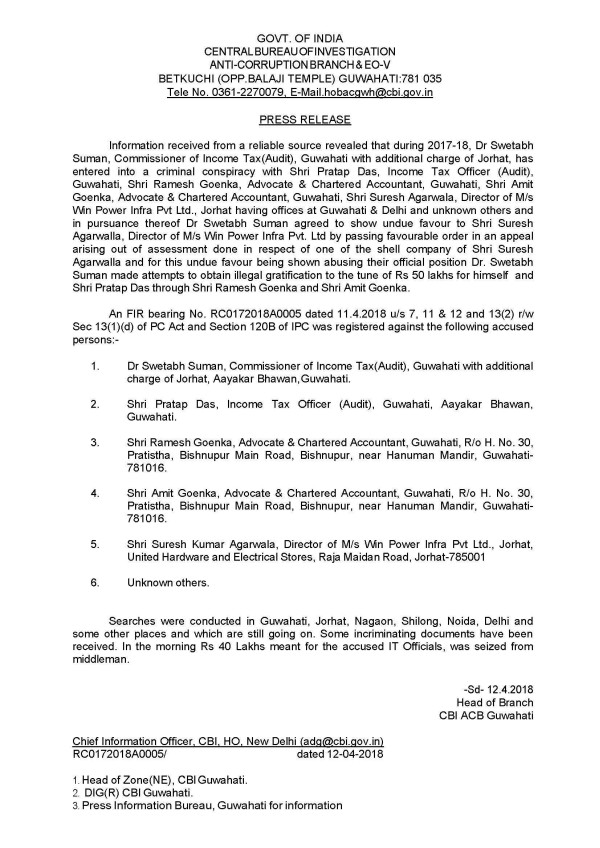