Criticisms are good things. They help us look at ourselves, to check and improve. There are situations where you feel that nothing you say or do seems right, where there is constant criticism. How do we satisfy people at that time? We must first be satisfied with ourselves before we can satisfy others. If we do not have the power to quickly change the negative attitude of others, we must atleast start with ourselves. Change our attitude towards the one who is constantly criticizing. Adopt more positive approach. Positive thoughts, words and actions will eventually bring positive results. Continue acting in this Godly manner. Atleast God will be pleased with you........... 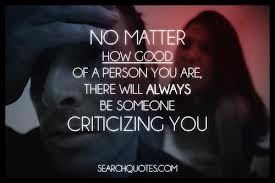 Criticism may not be agreeable, but it is necessary. It fulfils the same function as pain in the human body. It calls attention to an unhealthy state of things.

The strength of Criticism lies in the weakness of the thing criticized.

“Don't criticize what you can't understand.”

Be the Better Person
Too many times we take criticism as a personal attack, as an insult to who we are. But it’s not. Well, perhaps sometimes it is, but we don’t have to take it that way. Take it as a criticism of your actions, not your person. If you do that, you can detach yourself from the criticism emotionally and see what should be done.

But the way that many of us handle the criticisms that we see as personal attacks is by attacking back. “I’m not going to let someone talk to me that way.” Especially if this criticism is made in public, such as in the comments of a blog. You have to defend yourself, and attack the attacker … right?

You are doing the same thing. Giving advice.

"Criticism is an indirect form of self-boasting."