And, in case you are still wondering the relevance of 29th August, here it goes. National Sports Day is celebrated across the country today to commemorate the birth anniversary of the magician who put India on the sporting map of the world,

Dhyan Chand (29 August 1905 – 3 December 1979) was an Indian Hockey player widely considered to be one of the greatest players of all time.Chand is most remembered for his goal-scoring feats and for his three Olympic gold medals (1928, 1932, and 1936) in field hockey, during an era where India was dominant in the sport.

Known as “The Wizard” for his superb ball control, Chand played his final international match in 1948, having scored more than 400 goals during his international career.

Even today, Dhyan Chand remains a legendary figure in Indian and world hockey. His astounding skills have been glorified in various apocryphal stories and anecdotes. A number of such these revolve around the fact that Singh had a magical control over dribbling the ball. 29 August, Chand's birthday, is celebrated as National Sports Day in India.

In a cricket-obsessed country like ours,  Bradman’s average is at everyone’s fingertips. A ‘sports fanatic’ is more likely to remember how many times Dhoni’s last ball six has won India a game, or the opposition against which Sachin scored his 100th international century, but rarely would you get the correct answer if you ask them the number of goals Dhyan Chand scored in his international career.

More than 400 is the answer. Interestingly, this figure does not account for the goals he scored overall in his glorious career spanning over 20 years. That number would roughly be touching 1000. Equally brilliant as 99.94, if not better.

Don Bradman’s statement on Sachin Tendulkar became a matter of national pride, but rarely would you find someone who recollects how spellbound the legendary Australian cricketer was on seeing Dhyan Chand’s stick work.

“He scores goals like runs in cricket,” remarked Bradman when the geniuses of their respective games came face to face in Adelaide in 1935.

Bradman, with all due respect, remains alive not only because of his sheer brilliance but also because of the fans who remember him as someone who left an incredible mark on the game. Unfortunately, Dhyan Chand, day by day, minute by minute is becoming a fading hero. A man whose mastery maybe soon forgotten or should we say, has been forgotten. 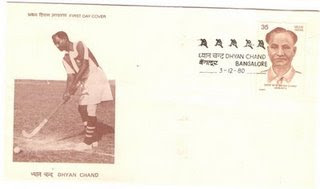 Thanks a lot for sharing the info....

Actually had no idea about it.....

Thanks for the info