Make the world a kinder place...

Take the everyday scenario of a traffic jam in the city. When cars are piled up and tempers run high, two auto rickshaws coming from different directions practically touch each other. Each wants to claim right of way and neither wants to budge and relent. That leads to heated arguments and the drivers so easily come to blows. What would happen if both would be prepared to let the other go first? That would immediately defuse the situation and help ease the jam, instead of obstructing traffic for even longer periods.

Today’s world is characterised by a loss of simple civilities. The loss of paradise was not only a loss of innocence but also a loss of the sense of the other being a sister or brother and a loss of basic civilities.

Surely the world was meant to be a kinder place. Instead, people snap at each other, customers and shopkeepers talk rudely to each other, few think of apologising even if they are in the wrong, the privileged treat others with contempt and the poor struggle, often denied human dignity.

The privileges of the powerful, the influential and the wealthy seem to be forever stretchable commodities. Often it becomes all a question of money, money, money. How we speak to others and the way we treat others becomes immaterial.

Think, how can I be kind to those I meet today? If each of us would begin in our little sphere, what a difference it would make! There would so much less stress all around and life would flow more smoothly. This would however demand from us much more patience. When everybody is in a hurry, it’s a sure recipe for frayed tempers even violence.

Strangely, politeness is seen as a form of weakness. Actually, it takes great strength to continue to be polite when others treat us with contempt. Many virtues that the modern world considers passé are actually signs of moral strength.

So don’t blow it. Be patient and steady. Life has a way of rewarding those who are kind and who treat others kindly. Sometimes, it is the ‘weak’ who show us the way. They are more caring of each other and so better equipped to face life.

If only we all shared, the world would be a kinder place. Nobody expects us to be super human in our approach to life. In fact the kinder we are, the more sensitive we become to the problems of others. Within our limitations we could be kinder to others.

Idealism always comes up against a rock. But still, the good dream lives on. There are those who continue to work quietly and who knows, the little seeds they sow, get nurtured and some day may yield a plentiful harvest.

Then it will not be a question of “this is mine” and “that is yours”. After all we are all sisters and brothers on this planet. We are heirs of a great human heritage. The heritage has survived because women and men were kind and not because they were super achievers. If we are kind today, that will not only shape our tomorrows but also the future heritage of the human race.

Thanx For Sharing with us 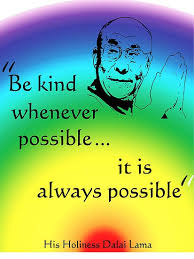