Against monthly procurement, the ratio of monthly payments also on rise from about 76% in May to about 80 % in October

Ministry of Micro, Small & Medium Enterprises (MSME) has released the figures of Procurement and Payment to Micro & Small Enterprises (MSEs), which are reflected on the Samadhan Portal, by the Central Public Sector Enterprises (CPSEs). Ministry has attached a table showing monthly rise in procurement, monthly rise in payments to MSMEs and fall in the ratio of pendency of payments. Ministry has also said that the pending payments are only to the tune of one fifth against the procurement and are mostly within 45 days; thus, forming part of normal business.

The details are as below:-

Ministry of MSME has further said that with the experience of last six months, it can be said that the CPSEs are very pro-active in procuring from the MSEs. They have also co-operated with the Ministry of MSME in reporting the details on new reporting format developed on the Samadhan portal after May, 2020. The rise in CPSEs’ business with MSEs in last six months also shows bigger capital expenditure by CPSEs. Also, more and more payments flowing to the MSEs from CPSEs every month shows liquidity flow at both fronts: CPSEs & MSEs.

This is an outcome of pro-active policies, timely interventions and undiluted support of Government of India and sustained campaign and efforts made by the MSME Ministry.

Here is some glimpse of the efforts made

•   Prime Minister’s call of ‘Atmnirbhar Bharat’ rejuvenated the spirit of MSMEs, strengthened their confidence to re-open and supply goods and services even while the covid pandemic is on;

•   Prime Minister’s call of ‘Vocal for Local’ motivated the individual and corporate users to buy from the MSEs;

•   Finance Minister’s announcement under the ‘Atmnirbhar Bharat’package to pay MSME dues in 45 days acted as a trigger for the Government & Corporate buyers and users of MSE goods and services;

•   After the above announcement, consistent efforts have been made by the Ministry of MSME;

•   Several rounds of letters have been written by Secretary, MSME to the stakeholders;

•   Cabinet Secretary had supported the Ministry and written letters to the CPSEs;

•   Several personal discussions and interventions have been made with the heads of CPSEs by Secretary, MSME;

•   An online reporting format has been developed by the MSME Ministry where CPSEs are filing the monthly details of procurement, payments made and payments pending;

•   State Governments have also been requested and persuaded by Secretary, MSME several times to see that MSE payments are made on time;

•   Two rounds of personal e-letters have been written by Secretary, MSME to the Indian Corporates.  On the first round, 500 letters were written and good response was received;

•   In the second lot, 3,000 e-letters were written before the festive season to the Indian corporate world;

•   It is heartening to note that the Corporate sector, both in the public and private domain, have responded very positively and pro-actively to help MSEs of the country;

•   As reported by many corporates and as per market feedback, most of the corporates have paid the MSME dues before the festivals;

•   This is also reflected in highest procurement, biggest transactions and maximum payments to MSEs by the CPSEs as shown in the table attached.

Ministry of MSME takes this opportunity to thank the Ministries, CPSEs and the India Inc. for co-operating with the Government in helping the MSME sector in this challenging time. 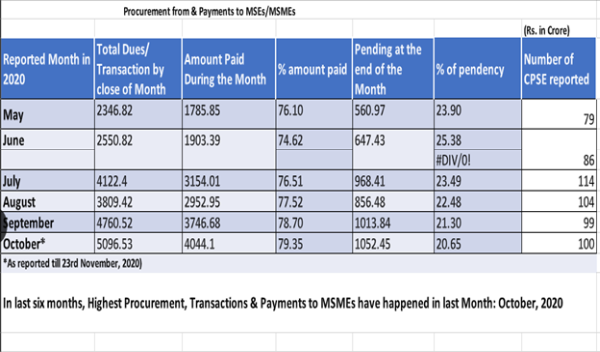 *Link of letters with positive response by Corporates to MSME Ministry’s call to clear MSME dues.