F.No.225/195/2016-1TA-II
Government of India Ministry of Finance
Department of Revenue
Central Board of Direct Taxes

The last date for making declarations under the Income Declaration Scheme 2016 is 30th September, 2016 which coincides with the last date of filing Income-tax returns by the tax payers whose accounts are audited and who are required to furnish the returns of income for Assessment Year 2016-17 by 30th September, 2016 as per provisions of section 139 (1) of Income tax Act, 1961.

In order to remove inconvenience and to facilitate ease of compliance, the Central Board of Direct Taxes, in exercise of powers conferred under section 119 of the Income-. Act, 1961, hereby extends the 'due-date' for furnishing such returns of Income from 30th September, 2016 to 17th October, 2016, in case of tax payers throughout India, who are liable to furnish their Income-tax return by the said 'due-date'.

(Deepshikha Sharma)
Director to the Government of India

Copy to:
1. PS to F.M./OSD to FM/PS to MoS(F)
2. PS to Revenue Secretary
3. Chairperson (CBOT), All Members, CBDT
4. All Pr. CCsIT/CCsIT/Pr.DsCIT/DsGIT
5. All Joint Secretaries/CsIT, CBDT
6. Directors/Deputy Secretaries/Under Secretaries of Central Board of Direct Taxes
7. ADG(Systems)-4 with request to place the order on official website.
8. Addl. CIT, Data Base Cell for placing it on irsofficers website.
9. The Institute of Chartered Accountants of India, New Delhi
10. All Chambers of Commerces
11. CIT(M&TP), COST
12. ADG(PR,PP&OL.) for placing on twitter handle of the department

(Deepshikha Sharma)
Director to the Government of India 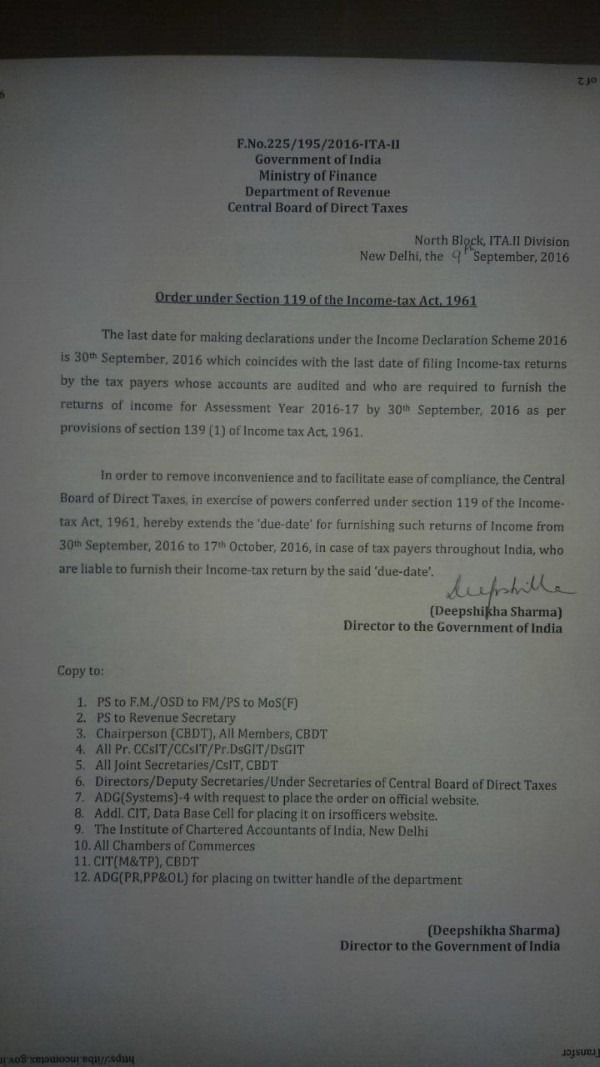