The Finance Minister in her address expressed her appreciation for the service for keeping Government expenditure going even during the most challenging time. She expressed her happiness that the organisation adopted quickly in wake of challenge posed by pandemic and used technology to bring out efficient solutions for keeping the funds moving.  Smt. Sitharaman expressed her satisfaction over the success of Direct Benefit Transfer through Public Financial Management system. She also lauded the organisations for smooth transfer of new accounting system for newly created UT of Ladakh despite the severe pandemic situation.

The Finance Minister acknowledged the roll out of Treasury Single Accounts System (TSA) in 15 Autonomous Bodies (ABs) in first phase and the organisation’s commitment to extend this to another 40 ABs by the coming Independence Day. TSA is a great systematic reform ensuring value for money which will reduce the borrowing of the Government. The Finance Minister further laid down three points road map for the organisation – paperless and transparent governance, keeping pace with technological advancements and continuity of seamless digital payments with user friendly interfaces. 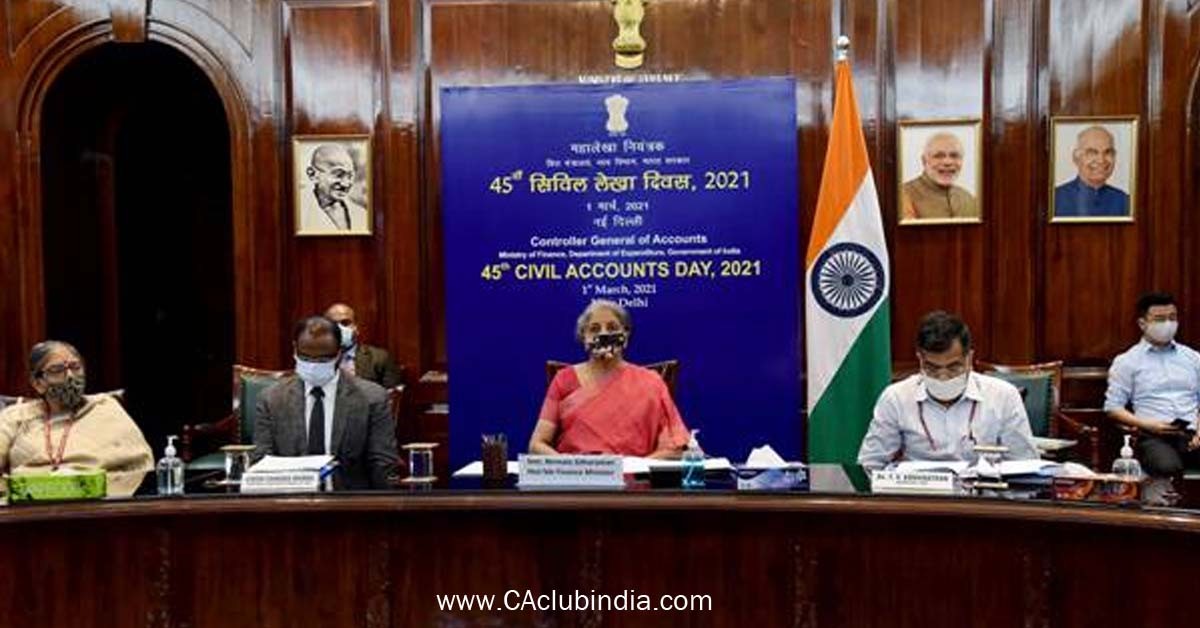 Shri G.C. Murmu, C&AG, commended the Service for its efficient, responsive system of budgeting, payment, accounting. He mentioned that Public financial Management System (PFMS) has facilitated electronic transactions in Government of India. PM Kisan scheme was successfully implemented through PFMS. He emphasised the importance of asset accounting and Natural Resource Accounting and other accounting reforms for the Government of India. He stressed upon the requirement of geographical tagging by using Information Technology.

Speaking on the occasion, Dr. T.V. Somanathan, Secretary, Expenditure, expressed his satisfaction over the organisation’s performance during the pandemic and mentioned that the organisation was declared as an essential service and has performed well as frontline workers. He expressed his satisfaction over the processing of payments during the pandemic without compromising on quality. He also said that going forward, the service should ensure speedy payments without compromising the quality.

Smt.  Soma Roy Burman, Controller General of Accounts (CGA) apprised that during the first lockdown, a record number of 4.16 crore transactions were carried out on 30th & 31st March, 2020.  She also informed that there was cash transfer of about Rs. 30,000 crore to around 21 crore women Jan Dhan Account beneficiaries under Pradhan Mantri Garib Kalyan Yojana and Rs. 56,000 crore to about 10 crore farmers under PM Kisan Samman Nidhi.  The CGA has shown commitment for complete universalisation of TSA for Autonomous Bodies in line with Budget Announcement 2021-22.  She assured that the service would constantly strive to achieve new heights in the field of payments, receipts, accounting and internal audit by effective use of technology, and improve fiscal reporting protocol for more effective financial management in sync with user expectation.

Dr. Bibek Debroy, Chairman, PM’s Economic Advisory Council, in its keynote address emphasised on the constructive role that responsible communities can play in nation building. While stressing on a relook at the 7th schedule, vis-à-vis devolution mechanisms for Panchayats & Urban local bodies, he said that actual service delivery of public goods needs to happen at local body level.

The Union Government initiated a major reform in Public Financial Management in 1976. The Audit and Accounts functions were separated by relieving the Comptroller and Auditor General of his responsibility of preparation of Union Government accounts. Consequently, the Indian Civil Accounts Service (ICAS) was established. The ICAS was carved out from the Indian Audit & Accounts Service (IA & AS), initially through the promulgation of an Ordinance amending the C & AG’s (Duties, Powers and Conditions of Service) Amendment Act, 1976. Later on, the Departmentalisation of Union Accounts (Transfer of Personnel) Act, 1976 was enacted by Parliament and assented to by Hon’ble President of India on 8th April, 1976. The Act was deemed to have come into force with effect from 1st March, 1976. Accordingly, the ICAS is celebrating March 1 every year as the “Civil Accounts Day”.

ICAS has been leading the reforms in Public Financial Management leveraging the digital technology including the development and management of PFMS (Public Financial Management System), the unified and single IT platform through which the payments and accounting functions related to the Union Government are performed. The seamless flow of funds during the pandemic from the government was necessary not just to sustain the essential services like medicine and law enforcement, but also to keep the economy afloat as consumption demand crashed. Indian Civil Accounts Organisation played a critical role in ensuring electronic flow of claims and bills and keeping the wheels of public expenditure rolling.