Waiver of late fee on filing of GSTR-3B for August and September, 2017

In view of the difficulties being faced during the return filing process and in order to further facilitate taxpayers, the competent authority has decided to waive the late fee on filing of GSTR-3B for the months of August and September, 2017. The necessary software changes are being carried out in the IT system.

Electronic cash ledger of the taxpayers who have already paid the late fee on filing of GSTR-3B either for the month of August or September, 2017 or those who pay such fee before the necessary changes are carried out in the IT system will be credited with the amount of late fee so paid be them.

[To be published in the Gazette of India, Extraordinary, Pan II, Section 3, Sub-section (i)]

G.S.R (E):- In exercise of the powers conferred by section 128 of the Central Goods and Services Tax Act, 2017 (12 of 2017). the Central Government, on the recommendations of the Council, hereby waives the late fee payable under section 47 of the said Act. for all registered persons who failed to furnish the return in FORM GSTR-3B for the months of August and September, 2017 by the due date.

Under Secretary to the Government of India 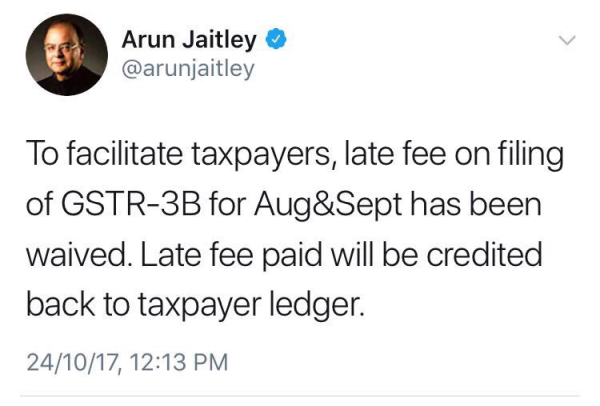