There were two childhood buddies who went through school and college and even joined the army together. War broke out and they were fighting in the same unit. One night they were ambushed.

Bullets were flying all over and out of the darkness came a voice, " Harry, please come and help me."

Harry immediately recognized the voice of his childhood buddy, Bill. He asked the captain if he could go.

The captain said, "No, I can't let you go, I am already short-handed and I cannot afford to lose one more person. Besides, the way Bill sounds he is not going to make it." Harry kept quiet.

Again the voice came, "Harry, please come and help me." Harry sat quietly because the captain had refused earlier.

Again and again the voice came.

Harry couldn't contain himself any longer and told the captain, "Captain, this is my childhood friend. I have to go and help."

The captain reluctantly let him go. Harry crawled through the darkness and dragged Bill back into the trench. They found that Bill was dead.

Now the captain got angry and shouted at Harry, "Didn't I tell you he was not going to make it? He is dead, you could have been killed. That was a mistake."

Harry replied, "Captain, I did the right thing. When I reached Bill he was still alive and his last words were 'Harry, I knew you would come."'

Prashant thats is really a short but really a wonderful story on freindship, the best feeling in the world.

But if he go before only ...den dere is hope he can save his

Sharing same thing that has already been shared creates duplication.....

Friendship cant be defined...!! Either you end up with a very good person or a lesson of lifetime...!!! Choosing of frends is important 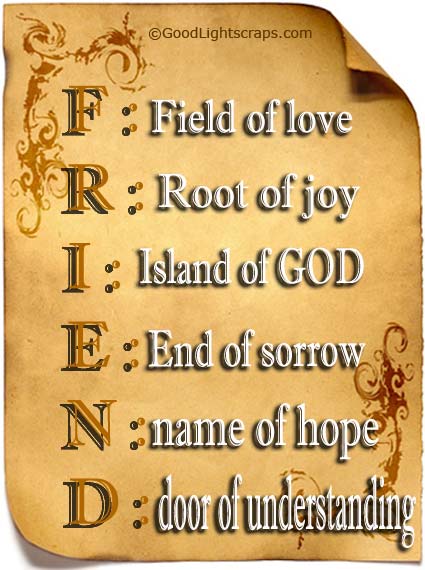 thanks to all for apprication