Attached is a photo from a Swiss Magazine Schweizer Illustriertein (November 1991) - it shows the top holders of Swiss bank accounts at the time.

Rajiv appears in the august company of other dictators like Saddam Hussein, Suharto of Indonesia, etc.

Till date, the Congress party has never refuted / spoken about these allegations.

These are our great leaders on whose birth & death anniversaries the government uses the tax payer's money to lavishly advertise their so-called 'achievements' in all national newspapers! 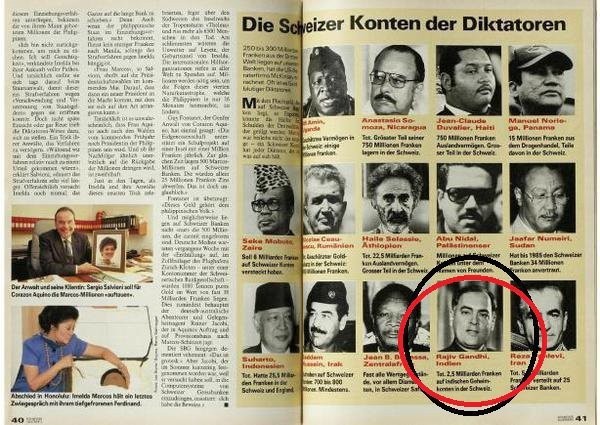 Now, This is the evidence which can be accepted.

I wonder why people chose these fools as ministers.

i will request to the moderators plz. don't delete this post, which is likely

OMG this is Breaking Newz

Thanks sumit for sharing

this is the real face of congress

NOTE:- THIS IS MY PERSONAL COMMENT . I AM NOT A POLITICAL LEADER

Congress opposes the war for anti-corruption.

Thanks for information, Many People dont know  This information still today,It is shame that all parties dont support fight against corruption

Thanks to everyone for see this serious message and comment on it.

VERY TRUE . THIS IS THE REAL FACT OF CONGRESS.