In 1923, eight of the wealthiest people in the world met. Their combined wealth, it is estimated, exceeded the wealth of the government of the United States at that time. These men certainly knew how to make a living and accumulate wealth. But  what happened to them 25 years later.

1.President of the largest steel company, Charles Schwab, lived on borrowed capital for  five years before he died bankrupt.

3.One of the greatest commodity traders, Arthur Cutton, died insolvent.

4.President of the New York Stock Exchange, Richard Whitney, was sent to jail.

5.A member of the President's Cabinet, Albert Fall, was pardoned from jail to go home and die in peace.

What they forgot was how to make a life! Money provides food for the hungry, medicine for the sick, clothes for the needy. Money is only a medium of exchange. It is good to have money and the things it can buy, but in the process of acquiring money,we don't want to lose the things that money can't buy. Money can only buy what money can buy. And in fact, the most precious things are those that money just can't buy.

There is nothing permanent in this world. Every thing changes except the law of change. Think over it from your own perspective. There are people who are so engrossed in their professional life to earn wealth  that they neglect their family, health and social responsibilities. 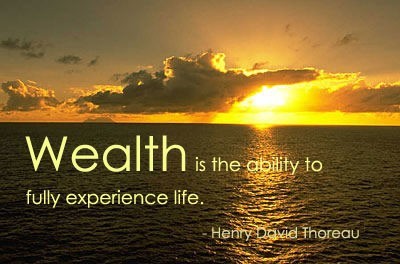 Real wealth is coupled with physical health, mental health, harmonious relationships, and a sense of connection with your source. When all of these components are met, life is a thing of joy, beauty, and total and complete fulfillment.

Real Wealth is the values for which a person should live.

We don't remember any such wealthy person of our city who has not contributed for charity.

May be there were hundres  in past or presently in thousands.

Very Nice....Real wealth is blessings og parents and love and respect of peoples.