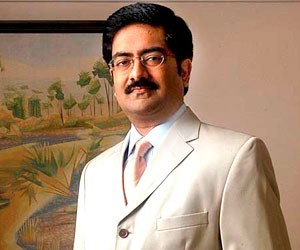 Born: June 14, 1967
Achievement: Chairman of the Aditya Birla Group; Vhosen as Ernst & Young Entrepreneur of the Year - India in 2005

Born on June 14, 1967, Kumar Mangalam Birla spent the early of his life in Calcutta and Mumbai. He is a Chartered Accountant and did his MBA (Masters in Business Administration) from the London Business School, London. Kumar Mangalam Birla took over as Chairman in 1995, at the age of 28, after sudden demise of his father, noted industrialist Aditya Birla, after whom the group is named.

Kumar Birla is the tenth richest Indian and aslo stands  10th in the  list of  Highest Paid CEO of the Country for the last year.

When Kumar Mangalam Birla assumed the mantle at the Aditya Birla Group, Doubts were raised about his ability to handle a giant business house with interests spanning viscose, textiles and garments on the one hand and cement, aluminium and fertilisers on the other. But Kumar Mangalam proved his skeptics wrong. He brought in radical changes, changed business strategies, professionalised the entire group and replaced internal systems. Kumar Mangalam reduced his group's dependence on the cyclic commodities sectors by entering consumer products.

Kumar Mangalam Birla also holds several key positions on various regulatory and professional boards, including chairmanship of the advisory committee constituted by the ministry of company affairs for 2006 and 2007, membership of the prime minister of India's advisory council on trade and industry, chairmanship of the board of trade reconstituted by the union minister of commerce and industry, and membership of the Central Board of Directors of the Reserve Bank of India.

Kumar Mangalam Birla has won several honors. Major among them include The Business Leader of the Year (2003) by The Economic Times, Business Man of the Year - 2003 by Business India, and The Ernst & Young Entrepreneur of the Year - India in 2005.

Thanks for sharing this information about such a great personality. Its a great inspiration for all of us.

Its great to see an Indian in the list of richest indian, and that too CA. A new sector that is wide open for opportunities. The other Indians that rank in the richest poople in the world include Shahrukh Khan, Varun Manian, MA Yusufali etc. This shows the growth in the Indian economy as well.