The Reserve Bank of India will shortly issue ₹ 2000 denomination banknotes in the Mahatma Gandhi (New) Series, with the inset letter ‘R’, bearing signature of Dr. Urjit R. Patel, Governor, Reserve Bank of India, and the year of printing '2016' printed on the reverse of the banknote. 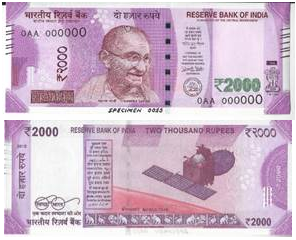 The design of these notes to be issued now is similar in all respects to the ₹ 2000 banknotes in Mahatma Gandhi (New) Series which was notified through Press Release No. 1144 dated November 08, 2016.

The banknotes issued earlier vide Press Release No. 1144 dated November 08, 2016. will continue to be legal tender.