1.The Central Goods and Services Tax Bill 2017 (The CGST Bill)

2.The Integrated Goods and Services Tax Bill 2017 (The IGST Bill)

4.The Goods and Services Tax (Compensation to the States) Bill 2017 (The Compensation Bill) 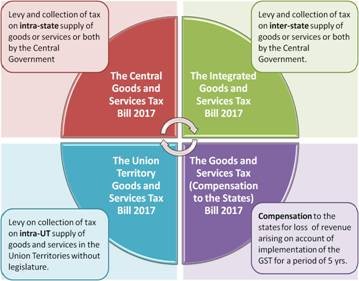 The passage of these four GST related bills will pave the way for the biggest reform in the area of Indirect Taxes in the history of independent India. The Union Government has taken up the implementation of GST with utmost priority and has passed the legislations on a fast track basis as it was pending for over a decade. With the Cabinet approval of these four bills, the GST regime in India is in the final stages of culmination and the GST law will most likely be implemented from 01st July, 2017. The above four Bills have been earlier approved by the GST Council after thorough, clause by clause, discussion over 12 meetings of the Council held in the last six months.

By amalgamating a large number of Central and State taxes into a single tax, it would mitigate cascading or double taxation in a major way and pave the way for a common national market. The Goods and Services Tax will thus help in the realization of the objective of “One Nation, One Tax” and improve the Ease of Doing Business climate in the country. It will also indirectly benefit the common man by reducing the tax burden especially on the daily consumer items of the common man.

Introduction of GST would also make Indian products competitive in the domestic and international markets. Studies show that this would have a boosting impact on economic growth. It is expected that the implementation of the Goods and Services Tax law will lead to an increase in Gross Domestic Product (GDP) of the country by 1-2%. This in turn will lead to the creation of more employment and increase in productivity.

The GST regime will bring in more transparency and efficiency with the minimization of human interface in the tax administration in the country. The GST regime is also likely to lead to a reduction in tax evasion as a result of the computerization of the taxation process. This tax, because of its transparent and self-policing character, would be easier to administer. This will in turn lead to increase in revenue collection for the Centre and the States.