GST Council Meeting held on 12th October 2020 was a continuation of the 42nd GST Council meeting, to discuss one agenda item, namely no. 9A. Discussions went on the issue of borrowing, extension of cess and so on.

States asked some specific clarifications, which were given. Many of the clarifications were on Attorney General's opinion on borrowing, GST Council's authority to extend cess collection beyond 5 years.

Eventually, it was a question of having heard everybody.After all clarifications were given, it was explained very clearly that GST Council is a body which represents a very high authority of Finance Ministers of all states.

As regards shortfall in compensation, it is for everyone to see that cess collection is inadequate to meet the shortfall. Since this is something which was not envisaged, the shortfall has to be met by borrowing.

Centre has issued a borrowing calendar, thus if the Centre goes beyond that to borrow, the G-Sec deals which are used as benchmark for every other borrowing will go up.This will hence increase borrowing costs for states & private sector too.

Increased borrowed costs is not something the Centre can afford at a time when India is looking at more money to invest and to borrow to do business.

The impact would not be as severe, if states were to borrow. States borrowing does not mean a chaotic situation. The Centre will facilitate states so that some states end up paying high interest rates while others obtain loans at reasonable rate. 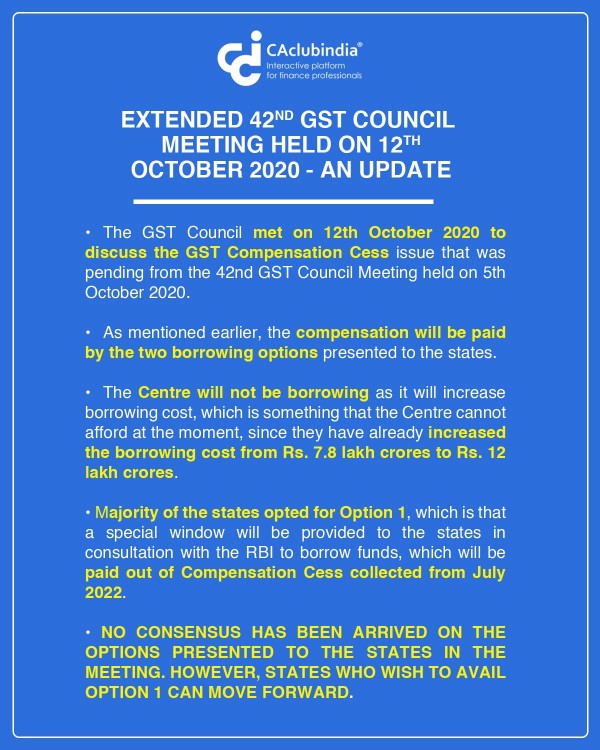 Two borrowing options were presented to the states in the 42nd GST Council Meeting held on 05.10.20.

No consensus has been arrived on options presented to states in meeting GST compensation shortfall. The GST Council can certainly take a call on cess, collection of cess, extending cess collection period. But members had the question, can the GST Council order?

While concluding, the FM said “while I respect there is no unanimity, I asked the Council whether members can stop other members from doing what they want to do. Can the Council stop a member from wanting to borrow and say the cess will repay that borrowing?”

Unfortunately, we were not able to arrive at a consensus. I appealed to all states - we have to quickly give answers to states who are fighting COVID19 on the ground and who want money in their hands.That is how the GST Council meeting ended today – FM

When states come to us, we will work with them and estimate the shortfall each state would face, the compensation which would become available to them, working along with the RBI. Centre will ensure that they get a good interest rate. Many states are ready for this. – FM