An event where various eminent speakers from finance community discussed GRC and its importance as a factor of business success.

The acronym GRC was invented as a shorthand reference to the critical capabilities that must work together to achieve desired business performance - the capabilities of the business that integrate the governance, risk, and compliance activities.

This includes the work done by all the departments like internal audit, finance, IT, compliance, legal as well as the lines of business, and the board itself.

Specifically, the three pillars of GRC are:

Governance – The effective, ethical management of a company by its board and managerial levels.

Risk – Something that can hinder an organization's operations or ability to sustain and grow in its market. An ability to effectively and cost-efficiently mitigate risks should be developed by an organization.

Compliance – A company's conformance with various regulatory requirements in force whether they are relating business operations, data retention, taxation or any other aspect of the business.

The event was held in four sessions, first one being the Introductory session and other three in-depth panel discussions on each of the components of GRC. Broadly, the topics discussed in the event were:

· Public-Private Partnership and its need in the Indian Economy;

· In-depth discussion on corporate governance and its changing definition;

· Managing risk as a part and parcel;

· Compliance and conformance with regulatory requirements with the help of various IT-based tools.

Governance and compliance are becoming life and blood of all the corporates. Company Secretaries in this reference are known as governance professionals.

It’s being talked about globally that problems in turnover, problems in production or problems in finances still can be sailed through, but a problem in risk and governance mechanism it needs regular attention. Company Secretaries are leaders in ensuring governance and management.” said Rajiv Bajaj, Council Member, ICSI while addressing to the ASSOCHAM conference.

Adding further, that the role of professionals is to actually ensure that governance is maintained within an organization. Mr. Bajaj said “Company Secretary professionals are entrusted with great responsibilities as advisors to the board” quoting the definition as per the Companies Act 2013. 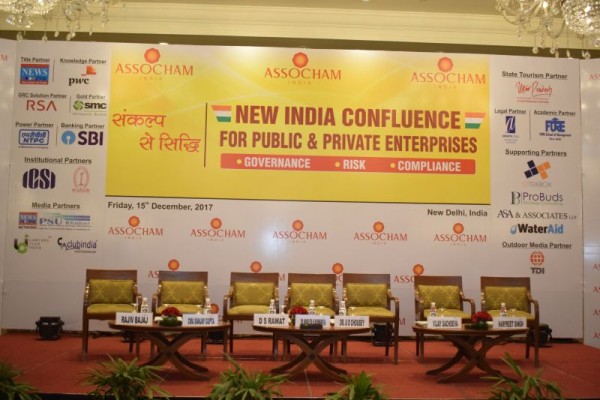 Addressing the conference, CMA Sanjay Gupta, President, Institute of Cost Accountants of India (ICAI) said Cost of compliance has increased day by day, but various new regulations have made doing business easier. Also, the country is looking forward to value creation through regulatory measures whether it is cost audit, tax audit or any other regulatory compliance.

Also, in the changing business dynamics, the role of professionals such as Chartered Accountants, Company Secretaries, and Cost Accountants is also redefined said, CMA Sanjay Gupta.

For good governance, clarity of in terms of responsibility and future course action is a prerequisite. Where work has been delegated, it must be delegated with full details in respect of the desired course of action, results expected and level of delegated authority with accountability” said one of the panelists.

Also, a documented limitation on authority, utilization of resources and alignment of interest is needed to make corporate governance efforts successful.

Dr. Mukulita Vijayawargiya seconded the thought and added “Now, the PPP model is not the alternative it has become the need of the hour. Since 1991, the new investment avenues have been opened to private sector – this synergy helped India to develop multifold but it also needs a strict regulatory regime to take it to the next level.”

Mr. Singh further said, companies need to build an adequate structure in the form of robust processes around governance, risk, and compliance (GRC). Moreover, there must be a complete synchronization between all the programs a company puts into action.