The function witnessed the presence of more than 1200 members from the CA Profession who are providing their services in various niche areas of the businesses & are playing an important role as strong pillars of the Indian Economy.

For approx. seven decades, ICAI has established its mark as a vital partner in economic growth of the Nation. As the premier Accounting Body in India and the second largest in the world, ICAI has extended significant contribution in the fields of education and professional excellence by upholding highest values and standards in Accounting, Auditing and Ethical conduct. 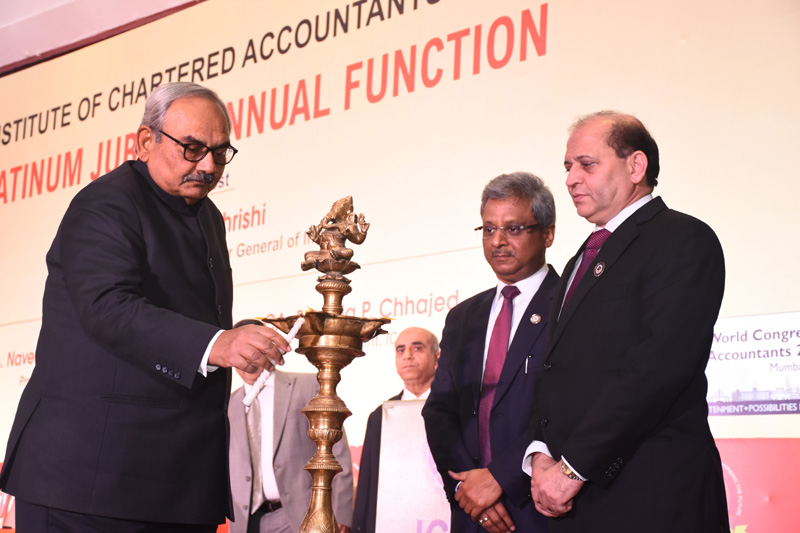 Shri Rajiv Mehrishi, Hon’ble Comptroller & Auditor General of India addressed the gathering and said, “Chartered Accountants are world class professionals and are recognised worldwide. The expectations from the CAs are high & I am sure that the Chartered Accountants will face all the upcoming challenges very diligently.”

He further added “GST is the biggest Taxation reform of last 7 decades & I am happy to share that ICAI has risen to it very well.”

ICAI has played a key role in making of a robust Indian corporate sector and its glorious prominence on the global horizons. Since its inception, ICAI has emerged as the regulator and developer of trusted and independent professional world class competencies in the areas of Accounting, Assurance, Taxation, Finance, Business Advisory Services and alike.

CA. Naveen N. D. Gupta, President ICAI presided over the function where he thanked his Colleagues for all the encouragement and support. In his Presidential address, President, ICAI, highlighted the achievements of the Institute during the year and how it has been made possible to achieve almost all the targets which he had envisaged.

CA. Naveen N.D.Gupta, President, ICAI said "ICAI is continuously engaged with the formulation and implementation of national policies with utmost diligence to catalyse the dream of New India by 2022 and entry into 5 trillion dollar economy group in next 5 years." He further added "ICAI is the national standards setter and only institution in India mandated to issue accounting and auditing standards."

During this age of increasing globalization and inter-dependence of national economies, ICAI has demonstrated its resilience to the changing situation and growing demands. Globalization has accelerated the shift in focus from Numbers to Strategic Thinking, thus metamorphoses the role of accountants as critical members of the management team.

While delivering the Vote of thanks, CA. Prafulla P. Chhajed, Vice-President, ICAI said "The remarkable journey which our Institute has undertaken in the last over 69 years has seen its transformation leading to one of the largest Accounting body in the world. ICAI members will continue to uphold Institute’s mission of promoting reliability and trust in the financial information."

The Chief Guest also distributed awards under various categories to meritorious students, Branches/Regional Councils & Overseas Chapters of ICAI. The Institute is committed to provide the best of the accounting education, to give transparent and truthful accounting, audit and governance service to the industry and the Nation.