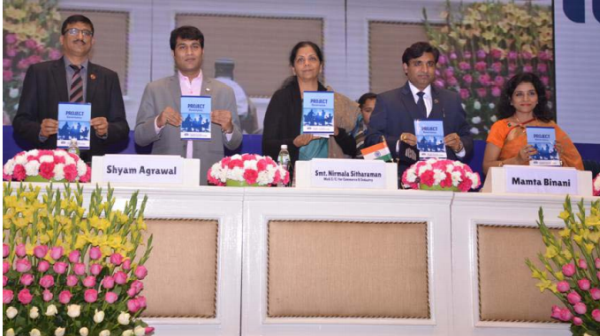 Smt. Nirmala Sitharaman, Hon’ble Minister of State for Commerce and Industry presented the Awards to the winner companies at Vigyan Bhawan, New Delhi.

In continuance of its commitment to good corporate governance, The Institute of Company Secretaries of India (ICSI) bestows the ICSI National Award for Excellence in Corporate Governance every year on the Best-Governed Companies in India.

The Two Best Governed Companies which won the 16th ICSI National Award for Excellence in Corporate Governance are:

The concept of Corporate Social Responsibility (CSR) which had its roots in the philanthropic activities is now increasingly changing to take into account the social, ethical and environmental concerns and in this backdrop, the 1st ICSI CSR Excellence Awards recognizes NATIONAL LEVEL efforts in creating and establishing an atmosphere of good corporate citizenry.

The 1st ICSI CSR Excellence Awards were won by:

ICSI Certificate of Recognition for Excellence in Corporate Governance were presented to other Top five companies (in Alphabetical order):

While addressing the august gathering, Mrs. Nirmala Sitharaman, Hon’ble Minister of State for Commerce and Industry said that “the new verve of “Minimum government, maximum governance, is precisely an indication of what is expected from the corporates in terms of transparency and accountability. Good governance is a mechanism to establish order, pursue social and economic progress and promote welfare of the people. As developing countries grapple with a multitude of socio-economic objectives, standards of governance have come into sharp focus in recent years. In this backdrop, I take this as an opportunity to share my thoughts and communicate with the huge number of professionals to nurture good governance in letter and spirit to further facilitate the making of new India.” she said.

CS Mamta Binani, President, ICSI delivered the welcome address, and said that, ICSI being one of the first professional bodies in India to initiate discussion on “Corporate Governance” in the light of Cadbury Committee Report took upon itself the task of promoting Good Governance in Corporate India by taking a number of initiatives in this direction. “One of the important initiatives of the Institute to promote good corporate governance is the ICSI National Award for Excellence in Corporate Governance which was instituted in the year 2001 to promote good governance practices among the corporate and to recognize those Companies worthy of being exemplified. She further informed that standards of policies and practices of governance are palpably going up in the Indian corporate sector.

CS (Dr.) Shyam Agrawal, Vice- President, ICSI informed that some companies significantly figured amongst the top companies, during evaluation of the Awards due to their exemplary corporate Governance Practices, however as these companies had won the ICSI National Award earlier, they are in the cooling off period for certain period before being considered for receiving of the Awards.

CS Dinesh Arora, Secretary, The ICSI, delivered the vote of thanks and informed that, “The Institute of Company Secretaries of India is committed to promote good corporate governance and has played pivotal role in creating awareness on various issues impinging upon corporate governance”.