Read this beautiful Information about Japan and the time has come for us to compare ourselves with the best in the world, even raise our standards as a matter of principle

1 - Did you know that Japanese children clean their schools every day for a quarter of an hour with teachers, which led to the emergence of a Japanese generation who is modest and keen on cleanliness.

2 - Did you know that any Japanese citizen who has a dog must carry bag and special bags to pick up dog droppings. Hygiene and their eagerness to address cleanliness is part of Japanese ethics.

3 - Did you know that hygiene worker in Japan is called "health engineer" and can command salary of USD 5000 to 8000 per month, and a cleaner is subjected to written and oral tests!!

4 - Did you know that Japan does not have any natural resources, and they are exposed to hundreds of earthquakes a year but do not prevent her from becoming the second largest economy in the world? -

5 - Did you know that Hiroshima returned to what it was economically vibrant before the fall of the atomic bomb in just ten years?

6 - Did you know that Japan prevents the use of mobile in trains, restaurants and indoor

8 - Did you know that the Japanese even though one of the richest people in the world but they do not have servants. The parents are responsible for the house and children -

9 - Did you know that there is no examination from the first to the third primary level; because the goal of education is to instill concepts and character building, not just examination and indoctrination. -

10 - Did you know that if you go to a buffet restaurant in Japan you will notice people only eat as much as they need without any waste. No wasteful food.

11 - Did you know that the rate of delayed trains in Japan is about 7 seconds per year!! They appreciate the value of time, very punctual to minutes and seconds

12 -. Did you know that children in schools brush their teeth (sterile) and clean their teeth after a meal at school; They maintain their health from an early age -

13 - Did you know that students take half an hour to finish their meals to ensure right digestion When asked about this concern, they said: These students are the future of Japan 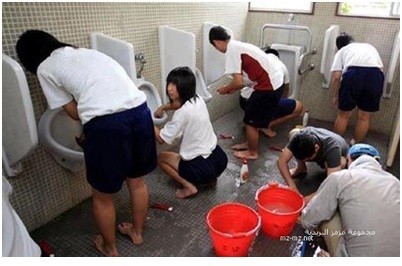 Wow. Amazing. There is a lot to learn from these people. Hats off

we should take lesson from Japanese in many respect.

Thanks sir for sharing such a valuable and inspirational post.

wonderful kashyap.. you deserve a thank for sharing this breakthrough message...

oNE MORE POINT TO ADD.

Thanks for sharing with us an extra point.....

We Should also implement this in our Country...

Yes if we also implement ,we can raise our standards and become the best.

Good share. One can always adopt the goodness from others.

@ kashyap: Indians from the inception had these values within them. We the new generation have just forgotten to inherit it from our ancestors and have started to take everything for granted.