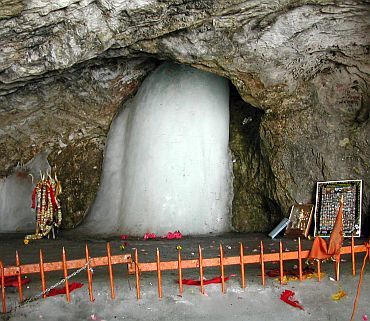 The annual Amarnath yatra began on Tuesday amid tight security as the first batch of 2,096 devotees left Jammu base camp for pilgrimage to the 13,500 meter-high cave shrine in South Kashmir Himalayas. With Central Reserve Police Force keeping strict vigil, a cavalcade of 73 vehicles carrying the pilgrims was flagged off by Minister for Tourism and Culture Nawang Rigzin Jora from Amarnath Basecamp at Bagwatinagar Yatri Niwas in Jammu around 5:00 am. The devotees offered prayers and chanted Lord Shiva slogans like Bum Bum Bolay, Chalo Amarnath, Chalo Ek Saath at the event. About 1,369 males, 421 females, 110 children and 196 Sadhus left in 49 buses and 24 Light Motor Vehicles (LMVs) for Pahalgam and Baltal base camps in Kashmir valley and their onward journey to the shrine. ''The yatra has begun from here today. The first batch has been flagged off for the cave shrine. All arrangements have been put in place for the smooth conduct of the yatra,'' Jora told media persons. There is no fear to the yatra and it is going on smoothly, he said after flagging off the event attended by Divisional Commissioner, Jammu, Pawan Kotwal and IGP Jammu Dilbagh Singh. 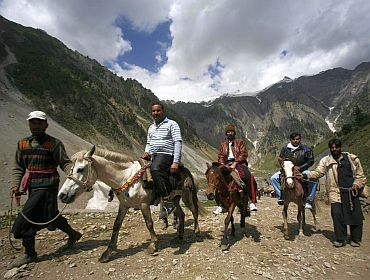 Adequate security arrangements have been made in Jammu and along the route to the Amarnath cave shrine for the safety and security of the pilgrims, Singh said. With paramilitary forces deployed along the highway, the yatra has crossed Udhampur. The pilgrims are scheduled to have a darshan of the holy ice 'ligum' of Lord Shiva at Amarnath cave on Wednesday. 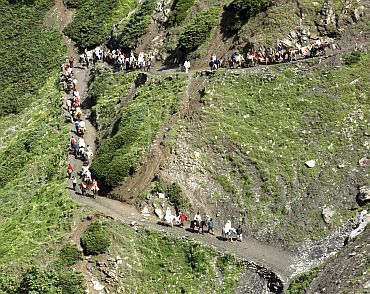 As many as 2.30 lakh pilgrims have been registered for the pilgrimage at various centers and online counters across the country. As part of stringent security measures, Road Opening Parties (ROPS), Quick Reaction Teams (QRTS) and Mobile Rescue Teams (MRTS) have been positioned at several places to deal with any exigencies. The Jammu and Kashmir Police has also launched a reception- cum-yatri assistance center in Jammu to facilitate smooth and easy boarding and lodging of the pilgrims. 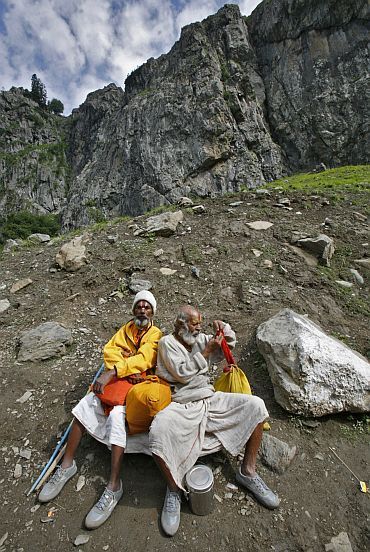 Air: The nearest aerodrome is Srinagar. Srinagar is a beautiful valley having world famous sights to see, such as Dal Lake, Nagina Lake, Shankaracharya Temple, Mughal Gardens and what not. It is the most sought after tourist place. It is also known as &quot;Paradise on earth&quot;. Srinagar is summer capital of Jammu &amp; Kashmir. There are daily flights to Srinagar from Delhi and Jammu. On some week days flights also pickup passengers from Chandigarh and Amritsar . 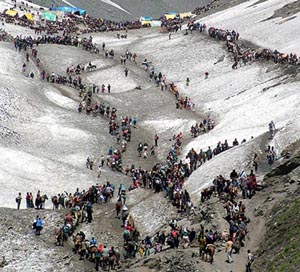 Rail: Jammu is the nearest Railway Station . Jammu is winter Capital of Jammu &amp; Kashmir. Jammu is a beautiful city and is also known as &quot;CITY OF TEMPLES&quot;. One may visit old temples such as Raghunath Temple , Mahadev Mandir and other temples . It is well connected with all stations of India.

Road: Jammu and Srinagar are also connected through road. Buses and Taxies are also available for this part of the journey .These can be hired on daily as well as full tour basis.

I also did amarnath yatra , its really awesome place , very beautiful place, i really enjoyed amarnath yatra, we r 50 members  group . We start our journey from pahalgam and we reach cave after 3 days of long journey. I almost died when we reach there, because of  rain, fog  and so cold weather I cant feel any movement in my  fingers. but the journey was so wonderful , every one must go there for once in life .
Amarnath yatra is one of the best journey in my life .

nice to see amarnath yatra. i would also like to go there