Mobile phone radiation and health concerns have been raised, especially following the enormous increase in the use of wireless mobile telephony throughout the world (as of August 2005, there were more than 2 billion users worldwide). This is because mobile phones use electromagnetic radiation in the microwave range. These concerns have induced a large body of research (both epidemiological and experimental, in non-human animals as well as in humans). Concerns about effects on health have also been raised regarding other digital wireless systems, such as data communication networks.

The World Health Organization has concluded, based upon the consensus view of the scientific and medical communities, that serious health effects (e.g. cancer) are very unlikely to be caused by cellular phones or their base stations[1] [2], and expects to make recommendations about mobile phones in 2007–08.

However, some national radiation advisory authorities, including those of Austria,[3] France,[4] Germany,[5] and Sweden[6] recommend to their citizens measures to minimize exposure. Examples of the recommendations are:

However, the use of "hands-free" was not recommended by the British Consumers' Association in a statement in November 2000.[7]

Please use left ear while using cell (mobile), because if you use the right one it will affect brain directly. This is a true fact from Apollo medical team. 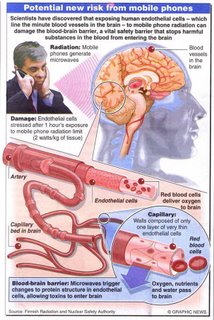 In 2000, the World Health Organization (WHO) recommended that the precautionary principle could be voluntarily adopted in this case.[44] It follows the recommendations of the European Community for environmental risks. According to the WHO, the "precautionary principle" is "a risk management policy applied in circumstances with a high degree of scientific uncertainty, reflecting the need to take action for a potentially serious risk without awaiting the results of scientific research." Other less stringent recommended approaches are prudent avoidance principle and ALARA (As Low as Reasonably Achievable). Although all of these are problematic in application, due to the widespread use and economic importance of wireless telecommunication systems in modern civilization, there is an increased popularity of such measures in the general public. They involve recommendations such as the minimization of cellphone usage, the limitation of use by at-risk population (such as children), the adoption of cellphones and microcells with ALARA levels of radiation, the wider use of hands-off and earphone technologies such as Bluetooth headsets, the adoption of maximal standards of exposure, RF field intensity and distance of base stations antennas from human habitations, and so forth.

Thanx for this useful information.

Thanx for this useful information.

Thanks for sharing such a valuble information