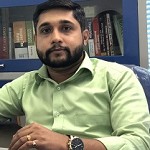 Mr. Saveesh K.V, born and brought up in Mankavu, a suburb of Calicut which has a good number of social, career and industrial infrastructures. Over the years the area has emerged as a favorite residential and commercial spot in the minds of people of Kozhikode.

After acquiring his Post Graduation in Commerce from the Zamorin’s Guruvayoorappan College, Calicut he planned himself to become a Tax Practitioner so that he could acquire maximum knowledge on how Indian tax scenario impacts the life of a normal human. So he started his career as a Tax Practitioner in Mankavu with the support of his brother-in-law. Within few months he planned on attaining any of the professional degrees like Chartered Accountancy/ Cost Accountancy/Company Secretary as it may help in improving his business analysis.

He concentrated his career more in Laws and qualified as a Company Secretary in his very first attempt. He started his own office in Mankavu and started his career as a Practicing Company Secretary. On the other side he didn’t stop his urge in learning. He continued his studies in CA and is now pursuing his CA Finals. The financial knowledge he has gained over these years has helped him to advice his clients not only in starting new ventures but also in unfolding the tax and financial hurdles.

To understand his busy schedules and his business priorities, he decided to choose his life partner from a similar field. He was privileged to marry Smt. Anjusha, a Chartered Accountant and daughter of a FCS and FCMA. After marriage she too joined the firm.

He had associated his office with similar professionals like Chartered Accountants, Cost Accountants, Advocates etc. and the firm “CSWA: CA & CS” has emerged as the number one multi professional firm in Malabar Region with its branches in Aluva, Thrissur, Ernakulam, Delhi & Chennai.

Speaking about his firm he is very confident and motivated - “The scope and variety of businesses and issues you come across is very difficult to replicate anywhere else. As the size of the firm increases, generally there’s a greater variety of clients, bigger peer group, and more technical resources for work and your professional certification program.” The experience he gained working with different clients and learning about their businesses gave him the opportunity to explore different areas of industry.

He is also the mentor and visiting faculty at Corporate Solutions World Ahead, a leading professional coaching institute in Mankavu for guiding the students who would like to pursue their career in CA/CS/CMA. His business interest is widespread and he is presently the Board member of M/s Fablums Medizone Private Limited, a Company incorporated under Companies Act 2013, having registered office at 12/486 B2, Abdutty Shopping Complex, Nagaram Village Kozhikode-673001, offshore with its branch  registered with Registrar of Companies for England and Wales. The Company is engaged in manufacturing of Medicine and have its own factory at Kozhikode. He is also a partner in M/s Harvirov Foods LLP”, a Limited Liability Partnership (LLP) having its registered office at 328 7th Main, 3rd Cross, Vivek Nagar Bangalore-560047 engaged in the business of crafted chocolates and confectionery items.

He has worked as a faculty and trainer of various Professional Institutes such as Lakshya CA Campus, Institute of Company Secretaries of India, Prudence CA Academy etc for CA, CS and ACCA courses and has taken various seminars on topics such as Goods & service Tax (GST), Company & LLP incorporation and Procedures, Various modes of Investment, Income Tax Planning, Tax Hearings and Tax saving. His major interests and expertise lies in papers like Taxation, Law, FEMA & Auditing.

He has been part of the Managing Committee of SIRC Calicut Chapter of ICSI and is presently Vice Chairman of the Institute of Company Secretaries of India, Calicut Chapter and has also held the post of Secretary and Treasurer of the Chapter in previous years.

His father is retired from Government Service and mother is a house wife. He has an elder sister married and settled in Calicut. He has a daughter Aishani Saveesh who is one and half years old. Her charming smile and kiddy plays keep him refreshed and recharged in his busy professional life.