Youths who made a difference in 1st decade of 21st century

(Guest)
Youths who made a difference in the first decade of 21st century
As the first decade of 21st century comes to an end, It will be worthwhile to remember some youths who have made a big difference to our nation in this decade. It will be more appropriate to begin with the opener. Yes, Sehwag is going to open the innings this time also.
1.Virendar Sehwag

The Delhi Daredevil (yes, I assume this would be the appropriate way to term him) had created such a big sensation in this decade as to what Sachin did in the previous decade. Many started rating him as the next Sachin. It would be a tough task for him to follow the footsteps of his mentor but I just loved the way he played cricket this decade. The first and the only Indian to score a triple century in tests that too twice. He was only 25 when he scored 309 against Pakistan in Multan and hence, earned the tag “Sultan of Multan”. Yes, how could I forget the century he made against Sri Lanka in August 2001 in the absence of Sachin which marked the entry of  the new master blaster.  It was the third fastest century(in terms of no of balls) by an Indian at that time. Eventually, Sehwag scored the fastest century by an Indian by blasting a 60 ball century against the kiwis in March 2009.
2.Satyendra Dubey

I was just a teenager when I read about Mr. Satyendra Dubey. Holding a degree from IIT Kanpur, he did what none of his batch mates did .i.e. finish his studies and settle in abroad. Instead, he chose to work in a Govt. of  India outfit, National Highways Authority of India(NHAI). In November 2002, he wrote a letter to PM writing about the corruption existing in the National Highway Authority of India mentioning the names of four officials and their misdeeds. He could have done what most of us would have did.i.e kept his mouth shut and ignored all such misdeeds but he did the opposite and fought against corruption. Unfortunately, no protection was provided to this whistleblower and in November 27, 2003, he was murdered in cold blood for speaking the truth. He was only 29 years old then. His life is an evidence that honesty is still relevant in this 21st century.
3.Shanmugam Manjunath

Hardly, two years have passed since Satyendra Dubey was killed. I read about Shanmugam Manjunath in November 2005. He did his MBA in IIM Lucknow after which he chose to work in Indian Oil Corporation, Lucknow. Already, he had ordered two petrol bunks to be sealed for selling adultrated oil and in November 19 2005, when he conducted a surprise raid in a petrol bunk in Lakhimpur Kheri, he was shot dead by the IOC employees. He was only 27 years old then. For fighting corruption, Mr. Dubey and Mr. Manjunath were paid for their lives. Not to forget, there has been a number of deaths of RTI activists in 2010 and the reason being they stood to justice. Its time for our country to provide protection to whistle blowers. Weren’t Satyendra Dubey and S. Manjunath enough??
4.Sarathbabu. E 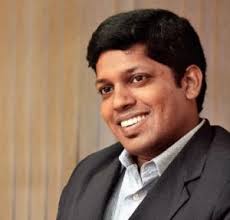 Born in the slums of  Madipakkam (Chennai). Sarathbabu was fighting against all odds right from his childhood. His mother was selling Idlis in the Chennai. But his dreams and ambitions were high and he held on to it. As a result, nothing stood in his way to stop him as he went on to graduate in BITS(Pilani) and IIM (Ahmedabad). After graduating in IIM in 2006 at the age of  27, he did not join any MNC for a job with a fat salary. Instead, he started his own Foodkings Catering Services (his childhood dream) and became a social entrepreneur generating employment to the poor and uneducated people in Chennai. He also won the Pepsi MTV Youth Icon of the year in the year 2008. He did not stop there. After the terrorist attacks in Mumbai in November 2008, he felt the need for a politician who works for a social change in India. He stood in the parliament elections as an Independent candidate in May 2009 and bagged 17000 votes (highest by an independent candidate despite the fact that he had not won). But this is not the end, he his much more determined to fight back and I hope that good fortune favours him. Despite all his success, Mr. Sarathbabu still remains strictly humble and continues to reside in the small hut where he had his beginnings.
5.Virat Kohli 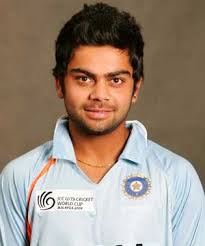 I was just a new entrant in CA course in December 2006 after clearing CA CPT the previous month when I read about this guy. He had batted for Delhi and scored 90 to save his team from Karnataka on December 20, 2006. Yes, it was the day on which his father had expired and he was only 18 then. When, most of us would have got broken down emotionally, this lad played with such guts at such a tender age. It was a good show of his emotional quotient. After a year and half in February 2008, he displayed the same prowress when he captained India to victory in the U19 world cup against South Africa when the team was in the state of collapse. Good tactical bowling changes made by him turned the match in India’s favour on that day. He has also shown some good performances in the series against Australlia and New Zealand recently. I sincerely hope that he maintains his form as World Cup 2011 is around the corner.
6.Raghu Khanna 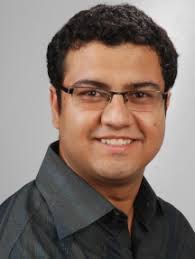 I first read about him in “Connect the Dots” by Rashmi Bansal. At the age of 23, fresh after he graduated from IIT Guwhati, he started Cashurdrive in May 2008. Cashurdrive is India’s only on vehicle advertising company. Just like every first generation entrepreneurs, Raghu Khanna had fought against all odds right from his childhood but he never gave up at any stage. Yes, whether it was getting his desired course in IIT or to pursue an overseas project. His life so far(he is only 25) is a perfect example that if u have an idea and know how to make it is marketable, then there is no need to wait and think, just do it, You don't need huge amount of cash or a fancy technology to start a successful business startup. 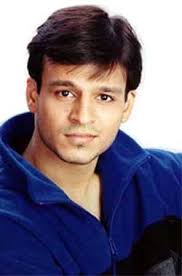 After making a successful debut in Bollywood(RGV’s Company) in 2002, he followed it with a good string in 2003 and 2004. In 2004, not only he acted as the role of a youth who works for a social change in Mani Ratnam’s Yuva but he followed it in his personal life when he worked for rehabilitating the tsunami affected victims in the village of Cuddalore (Tamil Nadu). I initially thought that he was doing the same for attracting media attention alone but I was wrong. He had a bad stint in 2005 due to majority of his time spent in social activities in the earlier part of the year. Yes, his hardwork and sacrifices did not go in vain as he earned awards and accolades from the Rotary International. He may dip in performance in Prince or Kurbaan but still he is a force to reckon with which I sincerely believe.
Its time for me to draw some conclusions. I may not have included Saina Nehwal, Sushil Kumar, Priyanka Chopra or Chetan Bhagat etc. here. There may be many who I would have not been aware of. But there are some lessons that I have sincerely learnt from these people:
1.      Honesty is the Best policy. Never sleep against injustice.
2.      Strive for success. The greatest good you can do to yourself is the power to surpass your dreams without using luck as an excuse.
3.      Simplicity is the utmost sophistication. Don’t let success go into your head. Be smart.
4.      What you do for your team and society makes a big difference. Don’t be selfish on your personal goals alone.
5.      Make the most of your youth life. Follow your passions and mostly follow what your heart says.
Wishing everyone a Happy and a prosperous New Year 2011. As this new decade begins, lets work and continue to strive for success until we have made an impact to the world.

But very good post and good amount of info. Thanks for sharing it. It's very nice
1 Like

If i had included everyone from Abhinav Bindra, M.S. Dhoni, Saina Nehwal, Anju George, etc. then i would have to write pages and pages. Ya, i had observed some good deeds from the people whom you have mentioned. But certain particular deeds were worth real attention. Yes, Mr. Satyendra Dubey and Mr. Manjunath. Infact, i have seen a lots of CAs encouraging corruption though we are not supposed to. The story of these two youngsters will be an eyeopener i believe. Btw, AR Rahman and Viswanathan are not youths. They are above 40s. Whereas, the people i have mentioned were in their 20s only when they made a difference.

Ya, agreed boss. No feud between us. The point is that ppl are already aware of Viswanathan Anand, ARR, Kalpana Chawla,etc. So, i believe they need no intro specially. But persons like Satyendra Dubey, S.Manjunath, Sarathbabu, etc. are not so well known as those ppl and yes,I believe their deeds need to be recognised. Regarding Virat Kohli, i suppose many would not be aware about the innings he played on 20.12.06 and the circumstances under which he played. I believe that deserves appreciation and attention. Sehwag needs no intro but i have included cos i admire his playing and style. Regarding Vivek Oberoi, i included him cos of the contribution he had made to my state at that time when tsunami had wrecked the lives of many. He was the only personality who had worked that much to improve their condition while the media persons in my state were doing some tactics just to gain more publicity. Hope i have satisfactorily replied to u. Wishing you a happy and prosperous New Year 2011. All the Best for your CA FInal group 2 results and CS FInal.

u guys forgot about none other than SACHIN TENDULKAR.....he is the biggest role model for india and a person who made a lot of difference in this decade..........

u r correct bt u have forget to mention some important names also........

Nice post Sreev. If it is yours priginal post. Then. you have a good art of writing. In all, I just think that Vivek Oberoi is undeserving. See, there are many who have done greater job than him. I know you can't include all, but I think he should be replaced. Well, that's a personal opinion. And, yes thanks for keeping Satyendra Dubey and Shanmugam Manjunath in the list. Atleast there are some people in India who still remember them. @ Aayush: Don't you think Tendulkar was a shining star and had made a difference before the decade as well.
2 Like

Thanks for your views. Ya, the views were my original but the facts had been taken from books, newspapers and web cos i cant change the facts. Regarding Vivek Oberoi, maybe in acting he may be undeserving(which i dont know cos i rarely see Hindi movies) but as a social worker,he just did a big difference. yes, when tsunami created a havoc in some villages from my state some six years ago, he single handedly undertook rehablitation work of two villages completely and yes, those kind acts should deserve attention. Regarding Sachin, he doesnt need me to blow his trumpets. Almost every Indian knows about him and his achivements. Wishing you a happy and a prosperous new year 2011.


Obviously, you will collect facts from such sources yaar. Ok, so I appreciate that work of Vivek. Although many people have done such work in other parts of India. But, I understand and respect your feelings about him. Keep writing. Regards, Abhishek K. Pandey