WONDERFUL STORY WE PROFESSIONALS MUST LEARN

Once upon a bright, sunny morning a
man and his young son left their farm to
make a trip into town. The boy rode atop their
donkey as the father walked alongside. Along the
road they encountered a fellow from the nearby
village. "You should be ashamed of yourself!" the
fellow said, admonishing the boy. "You ride comfortably
while your poor, old father has to walk. You have no
respect!" The boy and his father first sheepishly exchanged
glances, then exchanged places.
As the two continued their journey, they chanced upon another
fellow. "You selfish old man!" he said. "You take the easy ride
while your poor son wears himself out trying to keep up. You
should at least let the boy ride also." Not wishing to offend, the
old man helped his son climb aboard. The pair then continued
their journey.
Before long, they came upon a woman coming from the
opposite direction. She, too, found fault with their arrangement.
"I've never seen such cruelty! You two lazy louts
are too heavy for that poor donkey. It would be more
fitting for the two of you to be carrying the animal."
Not wishing to fall from favor with the woman,
the man directed his son to bind the donkey's
front hooves together, then back
hooves together. Meanwhile,
68
7. Fear of Rejection
the man himself cut a long, sturdy
pole from a nearby tree. The pair laid the
animal down, slid the pole through his bound
hooves, then lifted the pole to their shoulders-the
father on one end, the boy on the other, the donkey
hanging upside- down on the pole between them.
Carrying the donkey, the pair trudged along. As they
crossed the bridge that lead into town, the upside-down
donkey saw his reflection in the water below from an angle
that he had never before seen. The animal became frightened
and suddenly thrashed about violently, causing the pair to lose
their grips on the pole. Before they could grab him, the donkey
fell off the narrow bridge into the water below. Still bound, the
donkey was unable to swim. From the bridge, the father and son
helplessly watched as their donkey sank out of sight, into the
deep water below.

Moral: After a moment of silent reflection,
the father turned to the boy and spoke:
"Son, we learned a valuable lesson today.
We learned that when you try to satisfy
everyone you end up losing your ass." 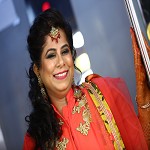