Well the other week on Facebook, I saw a really interesting picture titled "Don't Worry, Be Happy." It got me to wondering: Could it really be that simple to stop worrying? Just look at a picture and make worries go away?

Probably not that simple. However, the premise was solid. I knew this to be true for me because it was a visual representation of a technique I've used for years to minimize worrying. 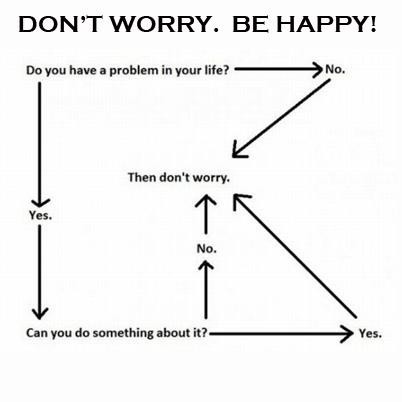 After you've looked at it, I'd like to briefly expand on the real essence of what it's saying...

At its essence, the picture is showing us that worry doesn't actually help us. It suggests that there's absolutely no situation in life that is improved simply by worrying. If you really reflect on this, I think you'll find it to be true in your own life. I know I have in mine.

Still, when life is really difficult it can feel almost impossible not to worry. In fact, I worry every day and it's not even necessarily about "huge" things. Nor is it necessarily "huge" worries. However, I notice those often unconscious thought patterns that include worry.

For each of us it looks different. It could be worry about finances or paying rent. It could be about your health or difficulties at work. The worry might be related to relationship challenges with friends, family, or romantic partners.

Sometimes it's big (like when it's tied to our physical survival). Sometimes the worry is smaller, like having forgotten to buy something at the store that you wanted or needed, or a concern that something you said might be misinterpreted.

No matter what it is though, worrying never helps the situation. Worrying may alert you to a situation that isn't optimal, and in this way worry has some limited value. It can be a brief signal that something isn't fitting quite right. However, the thing to remember is this:

For every moment you unnecessarily worry about a problem, that's one moment you're not doing something about the problem. Or at the very least, it's a moment that you're not enjoying life independent of the problem.

In any given moment, you have the choice either to worry about a problem, solve the problem, or ignore the problem.

Clearly worrying doesn't work, otherwise the people who worry the most would have solved the most problems.... and ultimately become happiest because they don't have any problems. :)

Solving the problem is usually the best solution. It alleviates the worry and makes space for greater things in life to unfold.

And there's even an upside to ignoring problems (at least temporarily). If you can't fix it and worrying about it won't help, you might as well enjoy the moment. Do something fun, relaxing, engaging, and preferably something that takes your mind off of the problem. I find that I do some of my best writing when I've recently been worrying about a problem.

The reason is simple: Even when you do "nothing" and just "enjoy" yourself, you're still doing SOMETHING about the worrying. You're releasing yourself, at least temporarily from the worrying.

This break often gives your subconscious mind time to explore and find solutions to the problem that your conscious mind just doesn't seem to grasp. Granted, I'm not saying that pure distraction is the best way to go all the time, and definitely not for extended periods of time. That just becomes denial, and denial serves nobody.

However, a brief break from worry can sometimes mean the difference between a great solution... and well... more worry.

Which circles us back to the original question:

Could it really be that easy to stop worrying?

The answer is "yes" and "no." I learned this the hard way through last year's "Dark Night of the Soul." There were days upon days, nights upon nights, when I was unable to sleep, unable to eat, and riddled with fear and anxiety. Sometimes it felt like I couldn't stop worrying.

And every chance I had, if I could do something about the worrying I did. Sometimes it was actively working on the problems I was facing. Sometimes it was deepening into my spiritual practices like meditation, gratitude, and sending love to others. Other times I would do anything that was either so distracting -or- required such intense focus, that my conscious mind didn't have a chance to worry.

I did my best to not stay in the space of "only worrying" for too long at a time. Even though I worried a lot... even though I worried every day... I can't even imagine what my life would have been like if I had chosen to not do something proactively to solve the problems, or if I hadn't allowed myself the inner freedom to distract and enjoy myself amidst the worry.

Long story short: While it isn't easy to just "stop worrying and be happy," there are very real and practical ways to reduce worry in your life. The first starts with recognizing that worry doesn't actually solve the problem. It never has. It never will.

Once you truly realize that, you'll eliminate most of your daily worries. I know this is true in my experience. I worry very little about things, even when they "go wrong." And I don't have to try and rationalize or convince myself "It's for the highest good" (though I believe that to be true), I actually know it intellectually as well (which is where worry comes from).

Sure there will be extreme situations that literally force the worry out of us. I share my Dark Night of the Soul as an example of this kind of severe situation. However, the majority of worries that we carry around each day are not quite that extreme.

So next time you forget something you "should" have remembered...

Sext time you're late for an "important" meeting...

Or next time you have a relationship problem...

Then remind yourself that worrying won't solve the problem. This reminder coupled with a few deep breaths can make a HUGE difference in reducing the worry in your life (regardless of whether you worry big or have few worries at all).

Thank you For Reading...

Good one thanx a lot for sharing.....

(Guest)
wow!! rightly said... worry has never helped to find solution..., never it will be..., we have two options.. being worried or being happy... whatever we choose, we will achieve it...

U dissipated all my worry

Worries are an illusion. They make you live in the future, giving you

present. Worries are an excuse for not doing what you really have to

be doing. A reactive person appears very busy and worried. With

worry, no problems can be resolved. A proactive person focuses

attention on the present, acts with initiative, and the understanding

that being calm and free from worry is far more effective.

Clearly worrying doesn't work, otherwise the people who worry the most would have solved the most problems.... and ultimately become happiest because they don't have any problems. :)