The fundamental principle of GST laws worldwide is that it is a multi-stage tax and tax on value addition, with final consumer alone ultimately bearing the tax. This is ensured by allowing the facility of input credit across the supply chain wherein the tax paid on the previous stage would be given as credit in the hands of the purchaser (popularly known as ‘Input tax credit’ or ITC). For example, Steel supplied by ‘A’ is used to manufacture the body of the vehicle by ‘B’ which is in turn used to manufacture a car by ‘C’. The GST rate on steel is 18%, the vehicle body is 28%, and the car is 28%. The ITC flow is depicted below: 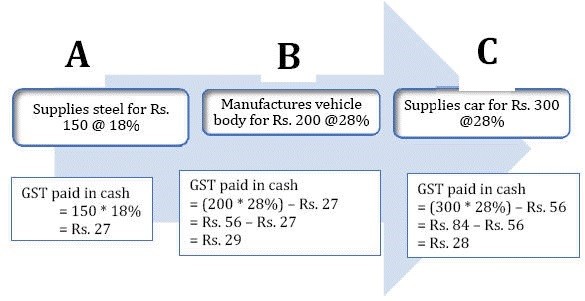 The net effect of ITC facility is that the value addition only gets taxed at each stage in the form of the tax payment in cash.

Instead of the above example of the car, if the example of a tractor is considered and if, tractor attracts GST rate of 12% then ‘D’, a supplier of tractors will supply the tractor at Rs. 300 (value of supply) + Rs. 36 (GST@ 12% on Rs. .300) to the ultimate consumer, ‘D’, the supplier of the tractor would have availed input tax credit of Rs. 56 (tax paid to ‘B’, the supplier of the vehicle body). This ITC would be used to pay GST on tractors of Rs. 36. In such a case, there will be an accumulation of ITC of Rs. .20 (Rs. 56 -36) to C. This is arising due to fact that the GST rate on inward supplies i.e. tractor body is higher (being 28%) than the GST rate on outward supplies of Tractors (being 12%). The consequence that follows is that Rs.20 remains unutilised and keeps on accumulating with no use for taxpayer except showing it as an asset, which runs contrary to the very tenet of GST being consumption tax (namely, only tax in the entire chain is the tax charged to end customer and in the entire supply chain there should not be any sticking or unabsorbed ITC). To mitigate this anomaly, GST law provides for refund of accumulated & unutilised excess ITC.

In this background, Section 54(3) of the CGST Act, 2017 is enacted to provide a refund of the unutilized ITC when the tax rate on inputs being higher than the output. The conjoint reading of Section 54(3), ibid along with associated definitions thereto, all kinds of ITC is refundable irrespective of the category (be it inputs, input services or capital goods). However, the contrary to such clear & unambiguous position, the Rule 89(5) of the CGST Rules, 2017 limits the refund only to the inputs ITC and do not allow the refund of ITC on input services and capital goods. The initial framed Rule 89(5), ibid allowed the refund of ITC on the input services but the rule was retrospectively amended[1] w.e.f. 01.07.2017 to limit the refund of ITC on the inputs alone. The adverse implications of Rule 89(5), ibid is explained with an example:

As seen from the comparison above, the rule limiting the refund thereby not fully implementing the mandate of section 54(3) that unutilized ITC shall be refunded.

Recently, the Hon’ble High Court of Gujarat in case of VKC Footsteps India Pvt. Ltd vs. UOI 2020 (7) TMI 726 acknowledging the above anomaly held that Rule 89(5), ibid is ultra vires the provisions of section 54(3), ibid and read down the Rule 89(5), ibid to the extent it restricts the refund of input services ITC.

Implications of the above-said judgement:

The suggested course of action:

While it is expected that the Government may appeal to the Hon’ble Supreme court, the Authors strongly believe that the law in vogue is unambiguous to allow the refund of input services & capital goods ITC. In this background, the suggested course of action is tabulated below:

It is also suggested to make representation to the GST council and Government to amend Rule 89(5), ibid to make it in line with the intentions of the lawmakers.