Joe and Johny were fixing a bomb in a car.
Joe : What would you do if the bomb explodes while fixing?
Johny : Dont worry, I have one more.
Joe was busy in removing a wheel from auto,
Johny asks: Y r u removing a wheel from your auto?
Joe: Can't u read 'Parking for two wheelers only'
In an interview,
Interviewer: How does an electric motor run?
Joe: Dhhuuuurrrrrrrrrr. ….
Inteviewer shouts: Stop it.
Joe: Dhhuurrrr dhup dhup dhup…
Johny: U cheated me.
Shopkeeper: No, I sold a good radio to u.
Johny: Radio label shows Made in Japan but radio says This is All India Radio!
Museum Administrator: That's a 500-year-old statue u've broken.
Johny: Thanks God! I thought it was a new one.
Joe joined a new job. 1st day he worked till late evening on the computer.Boss is happy and asks : "What work did u do?"
Joe: "Keyboard alphabets were not in order, so I made it alright..."
Johny proposes to a girl. Girl says, " Listen, I'm one year older to you"
Johny: "Ok, no problem darling, I will marry you next year."
Joe enters a store that sell curtains.
He tells the salesman, "I would like to buy a pair of pink curtains."
The salesman assured him that they had a large selection of pink curtains. He showed him several patterns, but Joe seemed to be having a hard time choosing.
Finally, he selects a lovely pink floral print.
The salesman asked what size curtains he needed.
Joe replies, "Fifteen inches."
"Fifteen inches?" asked the salesman. "That sounds very small, what room are they for?"
Joe tells him that they aren't for a room, they are for his computer monitor.
The surprised salesman replies, "But, sir, computers do not have curtains!"
Joe says, "Hellllooooooooo........I've got Windows!"
Joe goes to an electronics shop to buy a TV.
Do you have color TVs?
Sure.
Give me a green one, please.
Joe was in a nightclub in New York, dancing with a beautiful lady.
He whispered into her ear, "I love you."
She smiled and whispered back,"I love you too". then he whispered, "I love you three."

gr8 yaar from where u get it. 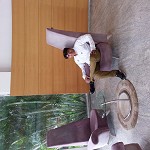