At least 89 people have died in Kolkata’s AMRI hospital blaze Friday . People were trapped and suffocated in the multi-storey building. It is the worst fire accident in any hospital in India ever .

The fire began before dawn from the basement of the building and soon engulfed four floors, trapping hundreds of people mostly critically ill patients .

The dead include 85 patients and 3 hospital staffers . Most of the deaths took place due to suffocation .Over 50 rescued patients are being treated at a nearby hospital .

Efforts are still on to look for survivors and bodies and to put out the smouldering and flickering fires inside the building .

Co-founded by the Emami & Shrachi Groups along with the West Bengal government in 1996, the hospital was once rated as amongst India’s best apparently was not properly equipped to fight fire .

Emami Group Chairman R.S. Goenka and Shrachi Group’s R.S. Todi — and four other directors of the hospital were arrested , chief minister Mamta Banerjee said . The hospital’s licence has been cancelled.

Just Look at the Carelessness...

My father was admitted to the ICU here with multiple organ failure. He was in a critical state and hence was in the ICU. I was advised to spend the night at the hospital. Around 3:30 am, I was among the first ones to notice the fumes in the basement and immediately rushed to the ICU to alert the doctors, nurses and administrative staff that there was a fire and patients needed to be removed. They paid no attention to this and said that such minor fires would not affect the ICU because it was completely secure. I had no choice but to take one last look at my father and gingerly go down to the ground floor where patients' relatives stayed at night.

Within a short while, smoke was all over the hospital and we started coughing horribly. Soon many of us started choking and something inside me said that all was lost. There was so much commotion all round, screams filled the air and too much smoke made it impossible for us to see anything. We moved out in the open. I remember that I just kept dialling numbers and kept screaming for help. The fire brigade arrived soon and we were prevented from entering the building.

About six hours hours later, when the names of the dead were being read out, my father's name was not there. My flicker of hope died down because his name was not on the list of survivorswho have been shifted to the other hospitals.

I was completely lost and so I kept looking at the face of every body that was being carried down, trying to see if any of them was my father. When I couldn't identify him, I accompanied the fire brigade and went up to the ICU and there he was lying dead with another patient.

I am now sitting outside the SSKM morgue waiting for my father's body to be sent for post mortem.

May Their Souls rest in Peace....

The concentration was only on making more and more profit and not on security...

Is it just another profitable business????

May their soul rest in peace....

There is no humanity left only business business ...Its really sad that a high level professional doctors who are here to save our lives are least concern of lives and want only money.

Shamefully painful incident... no less than a GENOCIDE.

You are right Sanjay Ji - The concentration was only on making more and more profit and not on security...

Slum dwellers - the supposedly HUMAN BEINGS - in action to save normal human beings. 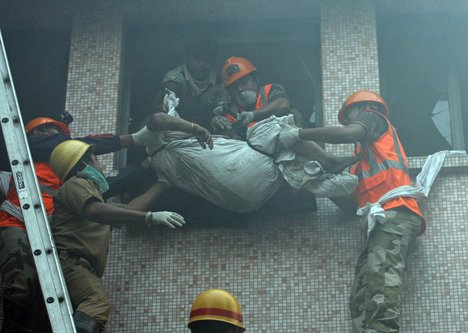 May their soul rest in peace....

Such a tragic thing to have happened to the victims.

Its very tragic incident ,which occur only because of some greedy people in management of Hospital.

This incident  is quite similar to Uphaar cinema fire incidents.

The Uphaar Cinema fire, one of the worst fire tragedies in recent Indian historyoccurred on Friday, June 13, 1997 at Uphaar Cinema, Green Park, Delhi, during the premiere screening of Border, a patriotic Hindi movie. 59 people died and 103 were seriously injured in the subsequent stampede; most of the victims were trapped on the balcony and were asphyxiated as they tried to reach dimly marked exits to escape the smoke and fire and found the doors locked.[3]

The fire broke out at 5:10 pm, after the transformer at the parking level burst, and 20 cars in the parking lot caught fire, eventually leading to a large scale fire in the five-storey building which housed the cinema hall and several offices. The cinema hall was situated in one of the busiest areas of South Delhi and the fire services were delayed owing to the heavy evening traffic.

Only 6 people are sent on remand .Others culprit are still enjoying free life..People who lost their nears and dears have unbearable pain .People are demanding a strict rules to avoid  this type of incident again,but only speech and promises are going on..we need action now..how many times our govt want to see this type of incidents.

"will the victims get justice or same things will  happens here also like uphaar cinema case?"

The hoax game of GOVT Continues...PROVIDING RS. 5 LAKHS WHO DIED IN THIS HAVOC...

MANEY CAN'T BUY THE DRIED TEARS OF A MOTHER...

EMPLTY SPACES  IN THE HEART OF THE PERSONS WAITING FOR THEIR HUSBAND/SON/WIFE/DAUGTHER/FATHER/MOTHER TO RETURN......THEY KNOW THEY WILL NEVER GONNA COME BACK BUT THEIR EYES ARE STILL ON THE GATES....STILL WAITING FOR THEIR ARRIVAL....

MAY GOD BLESS ALL THE VICTIMS...

MAY THIS MAMMOTH...ORGY NEVER HAPPEN AGAIN...

i want to ask  if this incident happens in a super speciality hospital than those taking their treatment  in government hospital their lifes is in danger . and our government never cares any persons life and by giving few bucks they think that the amount given by him is the solution of the all problems not in this case in any rail accident , bomb blast etc. same decision takes by gov. Delhi Government runs 37 major hospitals besides nearly 200 dispensaries.

The Health department official said it was the responsibility of the PWD to procure the NOC from the fire department as the agency constructed all the hospital buildings and incharge of maintaining them.

A senior official of the PWD said the agency has reviewed the issue following the fire tragedy in a Kolkata hospital and resolved to get NOC from the Fire department.

"We are taking the issue very seriously. Instructions are being issued to get NOC from the fire department for all the hospitals," he said.

Meanwhile, Health Minister A K Walia inaugurated a newly constructed private ward and an extension of casualty block in Bhagwan Mahavir Hospital at Pitampura which also does not have NOC from the fire department.

"This is a serious issue and we are looking into it," Walia said when asked about it.

govt. just looking on these major issues but no one taking actions on this issue no body cares on that persons those face this horrible incident

Shamefully painful incident... no less than a GENOCIDE.

This kind of fires does not happen in Government Hospital beacuse of less technicalites involved in Governement Hospital and these the Hospitals are made on large space of land and therefore lots of open area but then in these hospitals fire is not required cause peoples die with the treatment or say lack of it. The recent example in west Bengal is--

Incidence of B C Roy Hospital