Till the last decade, every day the newspaper carried one or the other Hot Topic about scandals, corrupt practice unfolding at highest government levels mostly by well-placed politicians and Ministers. Any English newspapers used to be of 20 pages and more. Followed by Investigative Journalism carried out in Indian soil and foreign soil on Indian corrupt practices.

All these news articles have come down in numbers especially on BIG number corrupt practices. This is authenticated by certain international rankings

Going by the two available international corruption rankings of countries, India has become less corrupt, at least over the recent period 2013-20. In terms of TRACE (an international business association) index, which measures 'Bribery Risk' as perceived by foreign investors while doing business in 194 countries, India's rank has hugely improved from 185 in 2014 to 77 in 2020. The Transparency International (TI) Corruption Perception Index, which measures corruption as perceived by domestic businesspeople in 180 countries, placed India at 94th rank in 2013 and at 86th rank in 2020, which is also an improvement. 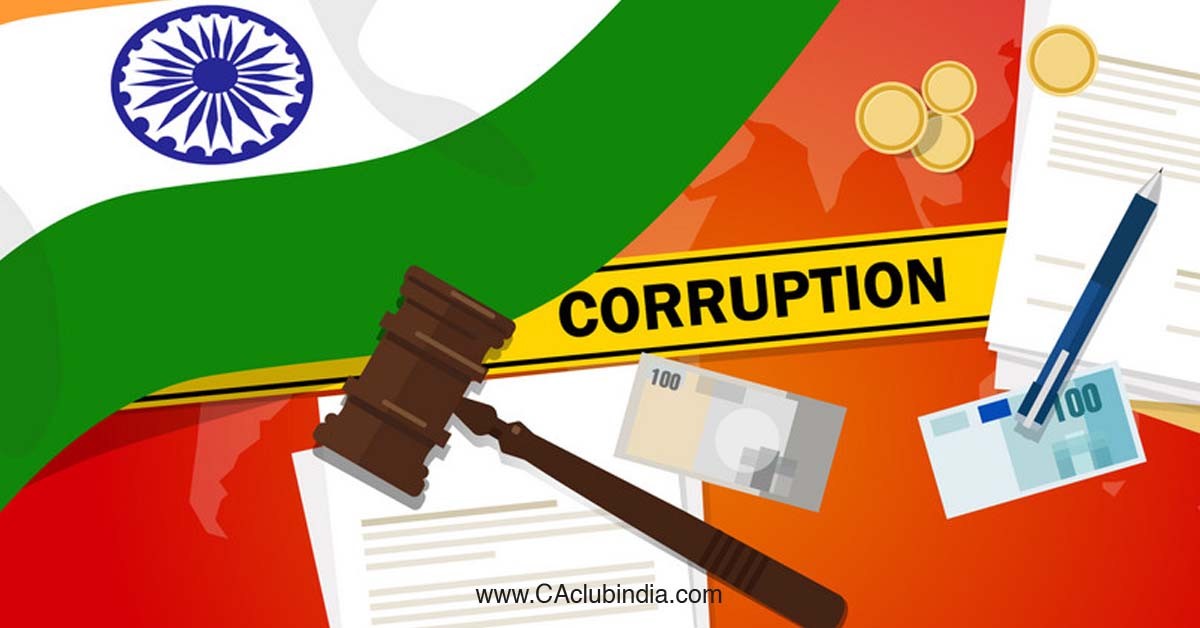 This is certainly good news!

But looking at it from a broader perspective both the above indices gather the perceptions from MNCs and big domestic businesses. Thus, it is safe to say, that the perceptions of small and medium enterprises are not captured in these measures. The small enterprises, on the other hand, have to deal with lower-level politicians, bureaucrats and inspectors who are more in number. Hence, harassment/corruption at lower levels still exists.

But what about the perception of ordinary citizens?

In several respects, the situation has definitely improved over the years. Let us take a brief look.

For example, the days when ordinary taxpayers had to arrange a tout to bribe the tax officials to complete the income tax assessment and get refunds are gone. Same is the case with Provident Fund withdrawals, availing ESI Benefits, dealing with Water Board, especially in Karnataka, Conversion of Land documents etc. The use of technology, like computerization in income tax department, made this possible.

In those days of licence-permit regime with shortages, rationing and price controls, the scope for corruption was enormous. Due to limited availability and great demand, Telephone or an LPG gas connection was little scarce which led to corruptive practices say jumping the queue. Which is now not the case as the systems have changed.

Alongside, a thriving black market developed as people lucky to get the permits found it profitable to sell those coveted permits/goods to others willing to pay a premium price. Smuggling and black-marketing were rampant in the markets for foreign exchange and imported goods. These types of corruption have mostly vanished due to good measures taken by present dispensation like abolition of industrial licensing, allowing entry of new players with corresponding increase in supply of goods, abundance of foreign exchange reserves, with introduction of abolition of import quotas and sharp reduction in import duties which are to be noted and appreciative.

Following the big spectrum and coal scams, the Supreme Court ruling that all sales/leases of natural resources will have to go through open competitive auctions has put an end to these types of scams. Though we are states far from putting a 100% end to such scams.

All these being said, there still are corruptive practices followed by some politicians by adopting new ways of illegal self-enrichment. These are popularly known as 'Syndicate Raj' (meaning anyone building a house is forced to buy either sub-standard building materials at more than market prices from people belonging to the ruling party) and 'cut-money' (meaning, the recipients of various government welfare schemes have to share a part of the benefits with local political bosses – otherwise their names will not figure in the list of beneficiaries). With the proliferation of government welfare schemes, the scope for such types of corruption has increased over time.

If it is true that India is becoming less corrupt, then what about the politician-police nexus which has given rise to another kind of extortion racket? Under this 'hafta' system, all businesses and operators – ranging from the small street-side tea vendors, hawkers, bars, restaurants to rich business houses – have to make a monthly payment which is shared between the police and the political leaders. Otherwise, they will face harassment for violating some law/regulation. Illegal trade in banned substances like drugs, arms and gutka also flourish the same way. That it is a huge money-spinner is coming to the surface by the unfolding Vaze extortion scam in Mumbai.

Ok now, let us compare corruptive practices in India with other developed countries. Even in countries like the US, Japan, South Korea and Israel, corruption exists in high ranks and several prime ministers and presidents have been forced to resign on corruption charges. But what's making the Indian situation more prevalent and difficult is, in contrast ordinary citizens in other countries do not have to face corruption in everyday life.

Having seen the effects of measures and some downsides too, we have to agree that the Government has put in several initiatives to put a check in corruption at high ranks within bureaucratic system at both Centre and State levels. A recent compulsory retirement given to hundreds of very senior officials in various departments in the centre are seen by the general populace as a welcoming measure. This practice was followed by many state governments too.

Yet there has been an expectation that the punishment for corruption needs to be severe if it has to be an effective deterrent. Actually, it is not the quantum of punishment but the probability of getting caught, prosecuted and ultimately sentenced that holds the key. Here, the honesty/efficiency of regulators, police and judiciary working in a time-bound manner comes into play to ensure India is 100% corruption free. These are areas where the Governments, both at Centre and at State have to do a lot more in India.

Reference: Article by Alok Ray, in a recent vernacular publication.


Category Others, Other Articles by - Mrudula M,Co-founder-KaizenEdu